]What should have been a fun Zoom call turned tragic this Sunday. If my father had been alone, he would have died of a massive heart attack in Ohio. Fortunately, he was trying to help out a friend with fixing her car. She administered chest compressions. I couldn’t do anything except survive the week.

This week’s entry comes with content warnings due to the topics mentioned.

My first Zoom call ever was that Sunday morning. A friend hosted along with some of her circle (a few folks I was acquainted with). We jived pretty well, the conversations were hopping, but then my father called.

Estranged is being used because this is a man whom I acknowledge as my father, I do love him. But having a relationship with the man in our adult years grew increasingly toxic, so I had to step away, a few thousand miles away.

The voice on the other end was not my father.

It was the woman who’s car he was in the middle of fixing. He collapsed, seized, and lost control of his bodily functions. She administered chest compressions until the EMTs arrived. The EMTs suspected COVID-19 complications. After thanking her for being there, the first thing I did was make sure she was okay, because I can only imagine how traumatic that must have been for her. She adores my father, which is good, but she also had had no clue what his family history was like.

After the ambulance was en route to the hospital, she called his Emergency Contacts.

My number is second in his In Case of an Emergency log.

There isn’t a lot one can do when your city has a Stay-At-Home order in place and there’s a pandemic ravaging through said city. Having me listed as an ICE contact doesn’t exactly work because I’m not local.

So I stayed home. 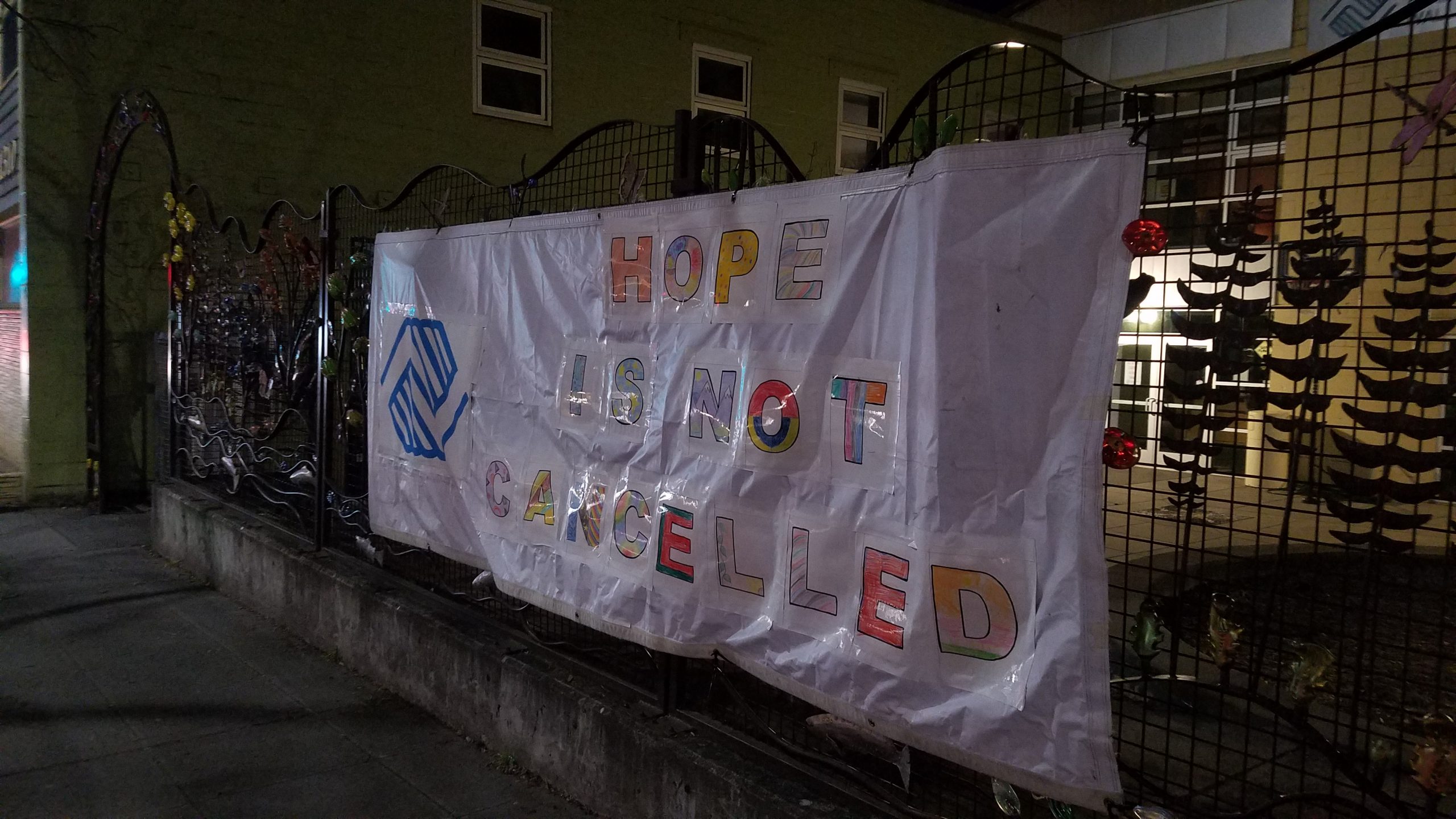 Some weeks aren’t positive. You exist, you take care of yourself, you do what you need to do to get through the day, and you rinse and repeat to survive the next day. This week found me in that odd state of feeling numb, removed from everything, and I feel like all I did was exist and cry over the phone. My other job turned into fielding phone calls and making Facebook updated. The rest of the week was parroting updates I received. Then I realized since I was three time-zones over, they updated me last. I stopped sharing updates.

That was when my goal for the week was singular: survive. After reeling, grieving, and monitoring the situation back in Ohio, my life didn’t stop because I had an estranged parent in a hospital handling active COVID-19 cases. When the Head ER Nurse asked if I would be flying in and from where the fastest shutdown I ever received outside of a sale would be when she heard “Seattle” leave my mouth.

“Sweetheart, stay home. Stay there. It would be criminally irresponsible for you to jump on a plane, pick up another vicious strain of COVID-19 and then introduce it here in Cincinnati. You will stay at home. We’ll take care of him here.”

We can thank societal conditioning for my reaction to the news. Nothing quite said “bad child who couldn’t take care of a parent like she was supposed to” then not being able to fly back to Ohio at the drop of a hat. Don’t bother unpacking that right now, I will take the time to unpack those issues in Week 5. But I’d be a terrible human if I flew out to Cincinnati, so I stayed home and sat enthralled at how fast my support network (that I had no idea would actually do anything) moved.

When Your Support Network Moves Fast

In a panic move, I tweeted that I needed help. I posted a similar message to alert my father’s family on Facebook.

A friend reached out immediately and I spent a good half hour sobbing on the phone with her. Another few messaged me, one being the Zoom call hostess because I forgot to turn my camera off. The general gist that they’d be here if they could be, but thanks to the pandemic, we had to keep our buns home.

My next phone call was to my mom. She divorced my father about seven or eight years ago. The main question on my brain was naturally about finances because I know those two filed for bankruptcy at one point and it devastated them.

“What happens if he dies? I can’t pay his bills.”

Terry, her husband, took over that call. The man is a master with legal issues. Hearing “if that happens, I’ll pay for your lawyer so you won’t have to,”  was the most comforting words I ever heard. Well, also hearing my mom acknowledge that yes, I am an adult, but I’m allowed to not have everything together right now. He would let me have my well-deserved meltdown.

She took over finding out the updates for me at that point. Which would be funny to those who know me, because I’m great in a crisis. But not when it’s one crisis nested in the middle of another global crisis.

In an effort to regain stability, I shifted my attention to the weather because, during the said meltdown,  I did notice that my neighborhood got some pretty good hail and rain.

One of the biggest things I miss from living in the Midwest is thunderstorms. Due to the microclimates and topography of the city, Seattle doesn’t achieve quite the right conditions for the cacophonous thunderstorms I’m used to. But we do occasionally get them. I can count on one hand the number I’ve heard. It would stay gloomy that entire week. Which, relatable, because I spent the rest of that week an emotional wreck.

Whenever I feel unsteady, I cope by reaching for things I feel are steady. In this case, since we all are supposed to stay inside, I focused on my day job and improving my personal living aesthetic, which I’m referring to as “bohemian glam”.

What is Bohemian Glam?

Bohemian glam is relatively new to the decor scene, but a quick Pinterest Seach will bombard you with a mashup of bohemian decor. The style incorporates a lot of warmth, woods and rattans, plants, soft textures, in combination with the glitz and glitter that comes with glamourous decor.

Basically, it’s the style I want for my studio space, and I’m getting there. The soft pinks and magentas are being swapped out for gem tones and deep grays, white for warmer bamboo, and textures that are not just velvet but are still soft with cotton rope and wool roving. Essentially, I want a jungalow. I’m blaming my four very happy succulents here. To be fair, I was going to be stuck in my flat through May 4th, so I might as well lean into it. 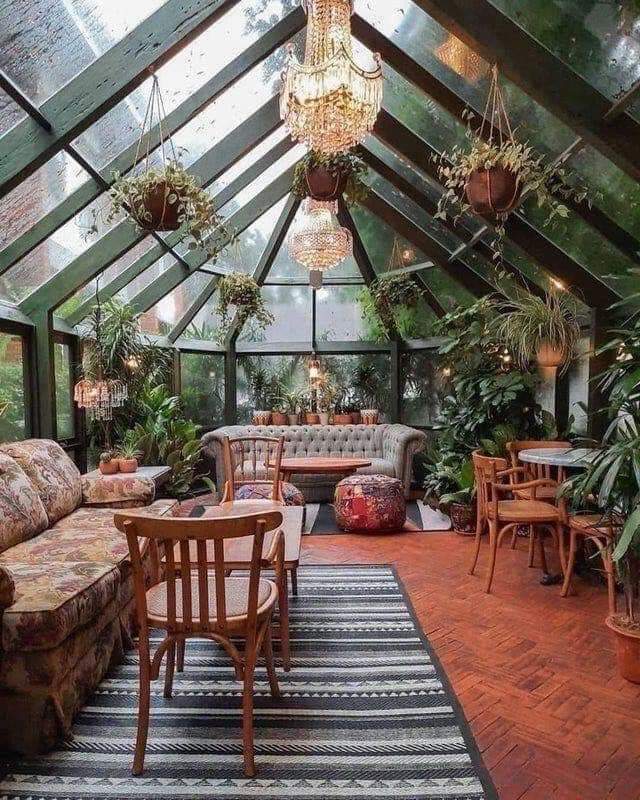 Governor Inslee extended our Stay-Home, Stay-Healthy Order on April 2, 2020. The order now ends on May 4, 2020, which wasn’t a surprise since other states were also extended their orders, but it sucked. My heart breaks for the small businesses I love and support because I have no idea how they’ll recover from this. Especially since actual small businesses are not receiving the SBA loans that are going to corporate franchises instead. But that’s also out of my control.

Another three weeks of no physical contact, that I can control and I hate it. Being physically affectionate with friends and not being able to hug them is beginning to wear. I know how squirrelly I get after four weeks of no contact and after the events of this week, all I want are hugs. Even when my anxiety makes my skin so sensitive and itchy that wearing clothes actually hurts.

In other words, I started another Canadian Smocked Pillow.

I delight in creating beautiful things. Words, occasional pictures (I am not an artist), websites, home decor, if I have a plan, I can take off from there! Sewing has been my go-to over the last few weeks. There’s something amazing with watching the project form as I move from planning to finishing that final knot! 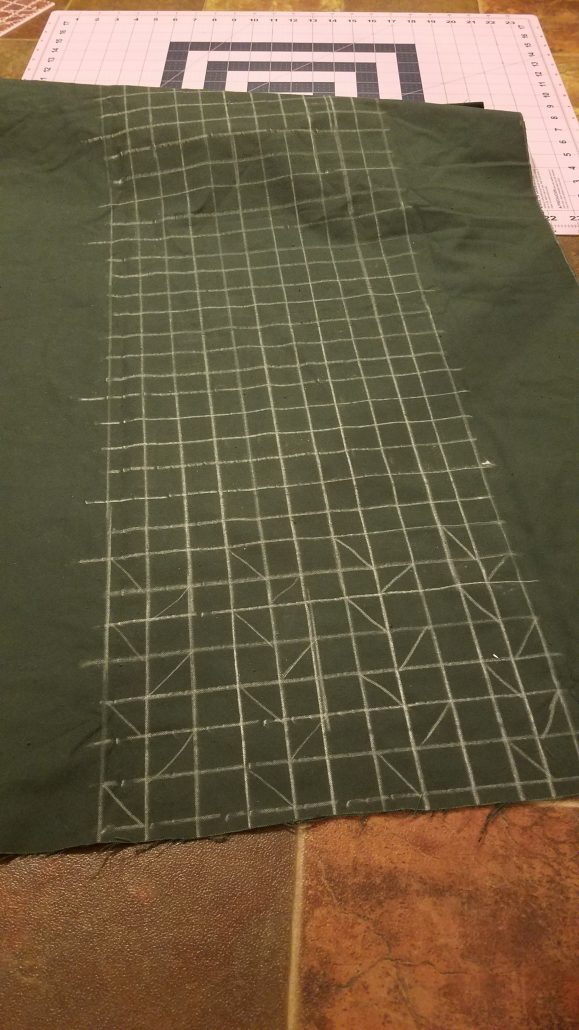 I started a second Canadian-smocked pillow in the same hunter green velvet as the first one. Because I have so many of the IKEA Sanela panels left. Sewing through each line of the grid keeps my hands busy. I can focus on just going through the motions of attaching each corner together, sewing it, knot, clip it and move on to the next square. Seeing how the smocking develops after a foot or two is enough to get me going, and then it’s just a race to the finish. If you want to try to make one of your own, you can check out Christine McConnell’s tutorial over on Youtube.

Let’s be real here, I wish I had more to offer with this post. In order to avoid emotional black holes that are grief and family history that nobody needs to hear about, I’m going to keep it high-level. We made it through this week. If all you did was survive, I need you to know that you’re doing great. 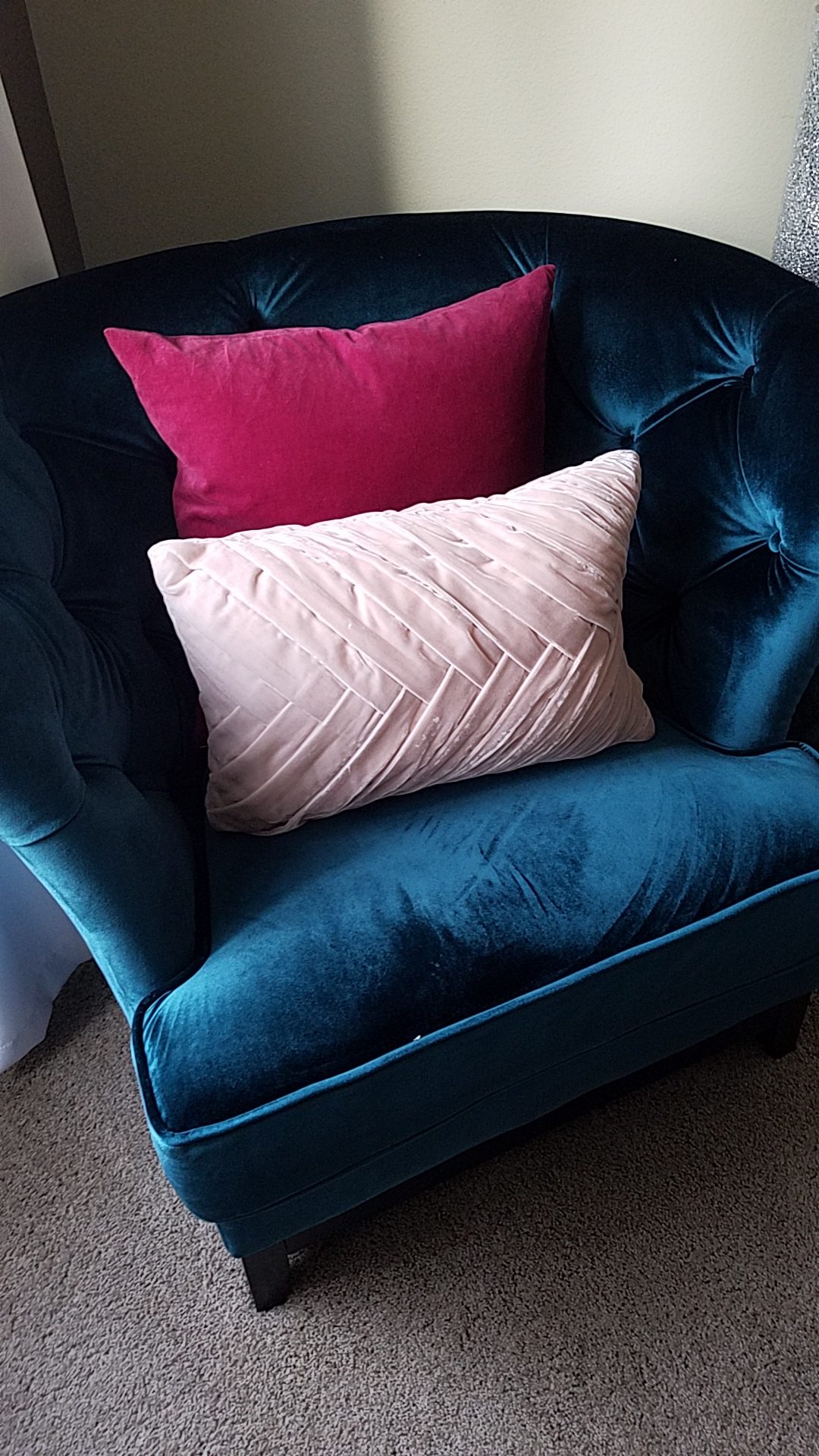 Why Did You Pick Your Colors? 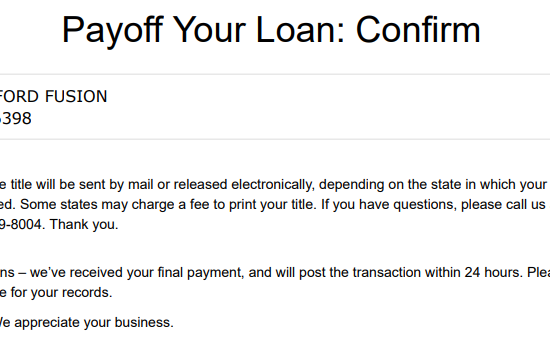 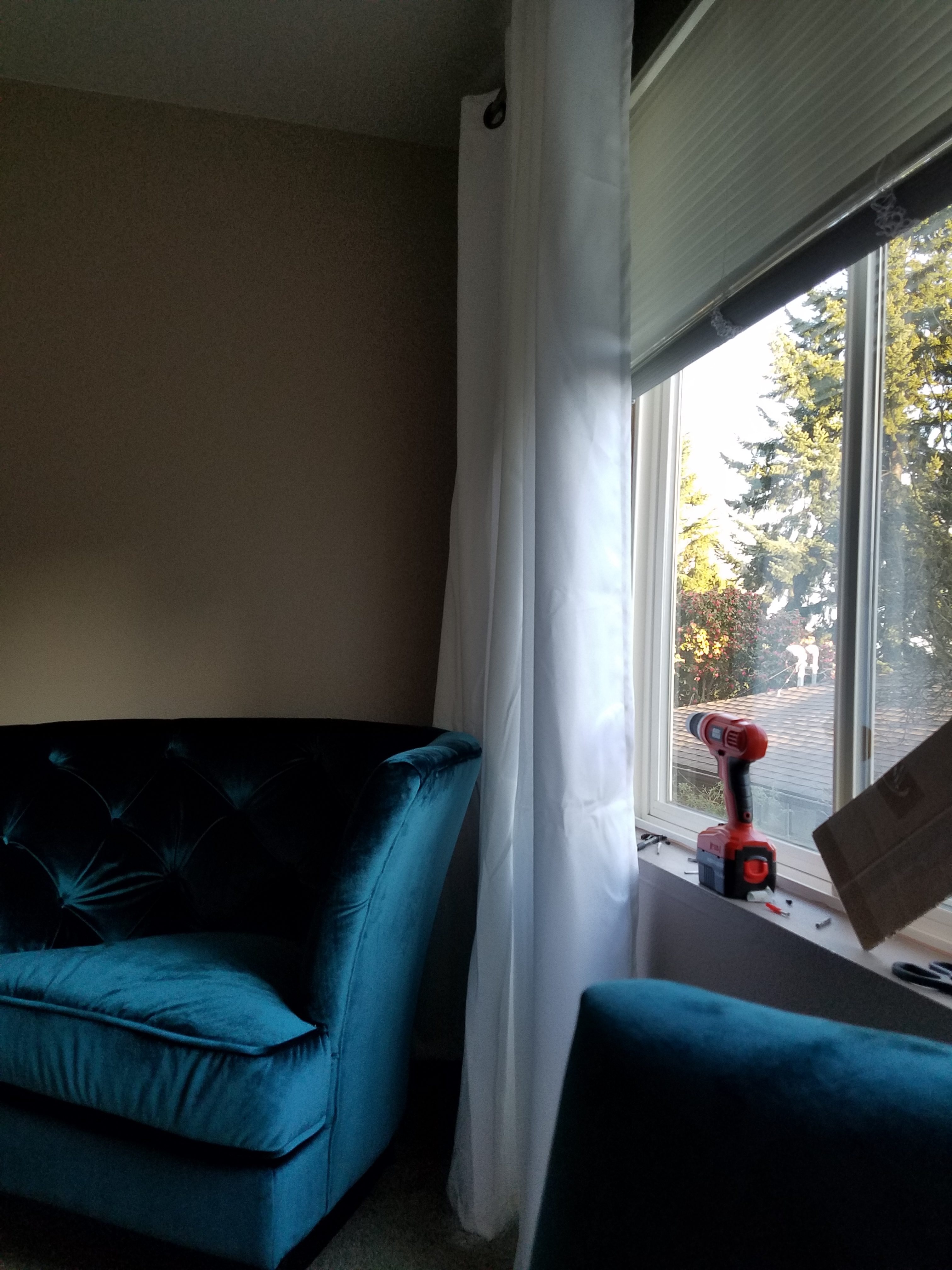 The Importance of Natural Light (and when to Fake It)